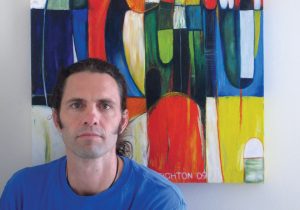 I am a self-taught artist working mostly in oil on canvas. I paint with bright colourful oils to elicit powerful emotions. I feel that a colourful environment increases happiness, and abstract painting invites repeat consideration as each viewing shows different nuances.

I live on Waiheke Island, in the Hauraki Gulf, off Auckland, New Zealand with my wife and 2 kids.

My strongest influence has been the work of Freidenreich Hundertwasser, the Austrian artist and architect, who lived in New Zealand for many years. If you haven’t seen his work, check it out – he’s a legend! I also feel an affinity for the works of Gustav Klimt, Paul Klee, Egon Schiele and Joan Miro.

I work in oils in an abstract expressionist style. The random is of most interest to me. Splinters of broken concrete in the sidewalk, the texture and colour of a fall of pumpkin skin peelings, the aerial view of a freshly tilled field, can all suggest a starting point for the kinds of things I’m expressing. I often begin working with the pallet knife and paint tubes directly on the canvas to generate colours, shapes and ‘moods’ that develop from the subconscious. I then work the piece up from what flows naturally from this initial process. The knife allows me to lay down broad motifs very quickly, so I can generate a kernel of an idea that will spark the flow of visual textures. This process is loose, chaotic and unpredictable. At other times I will work in a much more linear fashion, working from top to bottom or from the center out, and sometimes from a drawing that itself was quite loose and expressive. I always feel a struggle between the chaos of unfettered expression and the logic of formal relationships between (even abstract) ‘objects’ within the space of the canvas. For me the trick is finding the balance between them in each piece. There is an internal logic specific to each painting. Of course, every painting experience is different – some more chaotic, some more logical. The trick is to finish the work at the same level on the continuum that it started on. When working at the most chaotic, it’s virtually a one-step process, as it is very difficult to rework or add to the painting and still retain the original freedom. When I feel the flow of expression I like to continue painting until it is spent – working on late into the night, because the thread I pick up tomorrow morning may not be the same one I was following tonight, and may in fact sabotage the work that I have already put in on the canvas. I find it helps me if I maintain a kind of ‘detached attention’ when I work, almost a self-hypnosis to let my mind wander where it will go. My favourite result is the happy accident. If I can find a happy medium between the crazy and the anal-retentive, I will generally return to the painting some days or weeks later to refine the expressions I have written. This can be a very exciting and/or frustrating process, with much standing way back and gazing sort-of half-focused as well as standing right up close and leering menacingly at a particular space. There is much wringing of hands and muttering under the breath in-between brush strokes. Colours will be changed or eliminated entirely, and frequently the canvas will be rotated many times before I am happy with its final orientation.

I like an artwork to be something that the viewer can revisit and rediscover – finding a new area or internal relationship of interest. I intend for my paintings to be viewed up close as well as far away – it is the relationships between adjacent areas of the canvas that interest me more than the overall image – I like to think of the work growing from the detail to the entirety, from the specific to the general. The end result is always a surprise to me. The greatest difficulty in working in this way is that I have to find my way around the canvas almost by feel rather than by sight. Because it’s abstract, there is no objective right or wrong. There is no perspective or shadow. Where then, to place the next stroke? Philosophically, this is the greyest of grey areas, because it is only right when it ‘feels’ right. One of the hardest things to establish is when to stop. Often a painting that I think is done is reworked several weeks or even months later, to give more life to the piece or because it just doesn’t seem to ‘work’.

I am not generally painting to deliver a particular message, but hope for a work to be uplifting or interesting simply by it’s very nature, the presence of paint on canvas. This kind of work can be very difficult for some people – often I hear “I just don’t get it”. It’s not supposed to be inaccessible – indeed I try to make my images pleasing to the eye, but at the same time the viewer does have to just let go and trust in the image before them. This is not to say that there are not things I would like to express more overtly, or am thinking about whilst painting, but expressing it in an accessible way is difficult in an abstract painting. As contemporary artists I feel we have a certain obligation to provide some kind of a moral conscience for society, and this is something I’ll be looking to develop in the future.